“The beast growled and swiped at him. Leaping back, a banister caught him at his waist. There was nowhere to go. The beast took a playful step forward, pawing at him. He swung with a grunt catching it in the shoulder. The beast yowled and barked but the blow had little effect. “

So since I have been playing around with the fantasy genre as of late I figured I would share a short I came up with. While I was editing it occurred to me that this might work well as a serial so I’m going to release this story in segments. ‘Warg,’ is a horror/fantasy read following Wyatt a young villager who survives a viscous attack by a pack of giant wolves. His family is killed, his friends are killed. Left with nothing he decides to hunt the monsters down. I hope you like it. Here is part I, I will release a new segment every two weeks. 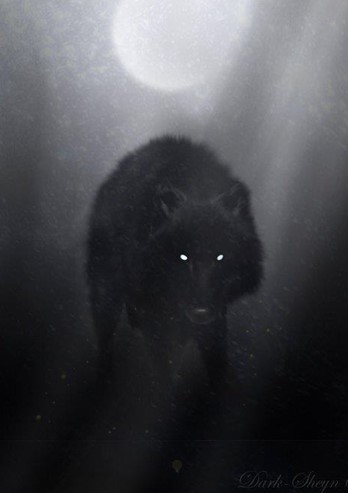 Wyatt dropped the last load of wood next to the forge then stretched and groaned. Pulling his arms across his chest one after the other his muscles tingled and burned. He dunked a ladle in the water bucket hanging from a thick support beam and gulped down it’s contents. The water was warm and stale, but it felt like a crystal spring after a long day of stoking the fire and pounding metal with his father. They had started the fires before sunrise and it was now dusk.

Horses needed shoes and four plows needed blades. With the planting season in full swing farmers all over the lake country were snapping tools on the stones and shale hidden in the dark lake country soil.

A sharp hunger pang answered the water as it hit his stomach and he noticed a plume of gray white smoke rising from the chimney of his family’s modest home. If his nose had not been so full of smoke and soot the smell of the stag stew his mother and sister were cooking would have reached him. His mouth watered regardless.

Walking through one last time he found a lone horse shoe resting on the second anvil, his anvil. There would be hell to pay if it was there in the morning when they started up again. Waylon, Wyatt’s father, had been the Smithy in Albion since before he was born. Waylon insisted that a sloppy forge led to sloppy work; rule number one was tidiness. Wyatt could not remember how he’d managed to leave it out like that. He and his father had been so busy the last month that there were a lot of things he’d missed, not to mention the call ups.

Early spring was the yearly call up. When every male of age was given the chance to serve in the regent’s forces. Wyatt was arguably the fastest, one of the strongest, and possibly best with a bow in all the lake country. A season never passed where there was not a new award adorning his bunk in the family’s small cabin. And never did a stag pass within reach of his bow without ending up on his mother’s table.

All winter the debate raged. His father served a tour, and was decorated. Why should he be any different? Waylon argued there was no time, the family needed him at home, at the forge. That was bunk, four years is the commitment, Wyatt argued. Four years is a life time his father would rule.

On the day of the call up his father had forbid it, and his mother had cried. At the door of the cabin he stood, duffel on one shoulder, bow and quiver on the other. The standoff was unlike any ever seen in the Smither home. It ended with Wyatt backing down, like he always did. There was no arguing with Waylon Smither, he was always so calm and cool that he just drove his opponent mad. Thinking of it still made Wyatt boil. Three of his closest friends had gone, Ried, Terr, and Glenn all accepted and were now off doing God knows what. They weren’t stoking a fire all day; That was damn sure.

He was undoing the knot of his heavy leather apron when a distant snap echoed from the wood behind the cabin. Every fiber in Wyatt Smither ignited at once and he froze, stretching his hearing. Slowly he gently draped the apron over it’s hook and stepped out the wide double doors of the forge. He could hear a heavy rustling and snapping. Something big, a stag. He gave it another second. A big stag. Quietly, he retrieved his bow and a quiver of arrows from the doorway. He slung the quiver over his shoulder and was knocking an arrow when he felt rather than saw three huge bodies shoot past the door heading into the village. He was barely out of the forge when he saw a giant brown beast crash through the door of his cabin. It happened so fast he was stunned. A monster just shattered the door to his family’s home. His mother and little sister were screaming. He didn’t realize he was moving until he noticed the fletching of an arrow at his cheek. He was in the doorway of the cabin and staring down the shaft of an arrow as his father roared and crashed into a wall under the massive battering of a thick fur covered limb. He fired. Another arrow was knocked, the first lodged deep between the beast’s shoulder blades. He and the beast met eye to eye as it turned its attention on him.

The second arrow entered its gaping jaws and punched through the back of its head. With a choking gurgle it collapsed in spasm on the splinters of the family dining table.

Wyatt’s mother and sister whimpered and held each other. His father was groaning and moving very slowly. There was blood staining the back and shoulder of his tunic. Wyatt’s ears were ringing. Wait, his mind scratched the thought through the shock of the past few moments. There was something else…

There were three of them!

Stumbling over the wreckage of the cabin door. He heard hysterics, and yelling throughout the village. He ran toward a cacophony of destruction that seemed to come from everywhere.

Halfway down the path he found Master Tambey laying on his back. The man was starring wide eyed at the darkening sky. His bowels were showing. As Wyatt reached the village center at the tavern three men flew from the window adjacent to the front door. A powerful roar pierced his ears. He heard wood splintering inside.

He entered quickly and broke to the right, his bowstring taught, arrow ready for flight. A lamp had broken and started a fire on the other side of the room. He thought he noticed a torso sticking out from under wreckage on the floor. Somewhere he heard pleading,

Another beast had master Brauer cornered, it followed him, playfully swatting at him as it walked along the bar. He shot as soon as he saw it and chided himself for being hasty. A rushed shot is a wasted shot. His father’s voice echoed in his mind. The arrow protruded from the beast’s belly. It turned and ripped it from its side. With a berserk shake of its head the reddened arrow flew across the tavern and the beast sprang at him. Wyatt dove out of the way before being skewered by glistening black claws. He hit the floor of the tavern hard and rolled over something soft that grunted beneath him. He bounded to his feet and found Talmadge, a farmer from up north. The older man spewed frothy blood and reached for him pleading. A massive paw drove the man’s head to the floorboards with a wet crunch and Wyatt was face to face with the monster.

Monster was the only description Wyatt could use to describe this thing. Similar to a wolf but on all fours, it stood almost as tall as a man. It’s jaws were like pincers lined in glistening needle-like teeth. Covered in brown fur two tall pointed ears stood on top of its head. Its eyes were ebony orbs so black and cold they froze his blood.

The beast paused, it seemed the thing was savoring what it had done to Talmadge. Was it amused..? Wyatt’s bow was gone and his arrows were strewn about everywhere. His hands floundered blindly behind him for anything he may use as a weapon. Grasping something wooden almost the width of his arm, Wyatt hefted an oak table leg. A splintered peg protruded from it about two inches.

The beast growled and swiped at him. Leaping back, a banister caught him at his waist. There was nowhere to go. The beast took a playful step forward, pawing at him. He swung with a grunt catching it in the shoulder. The beast yowled and barked but the blow had little effect. Wyatt fought a desperate panic rising within him. The beast reared up on its hind legs, paws wide, jaws gaping and collapsed on him like a tsunami of fur and teeth.