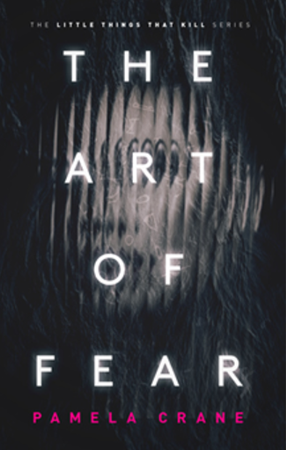 I have another author spotlight I would like to share since I am getting this blog up and going. Early reviews for Pamela Crane’s  The Art of Fear call it “An intricate literary thriller that will twist your brain and leave you breathless.” Pamela is the multi-award winning author of a long string of psychological thrillers.

“A life no girl should endure. A father no daughter could love. A twist no one would predict.

Ari Wilburn’s life ended long ago—the day she watched her little sister die in a tragic accident and did nothing to stop it. Crippled with self-blame and resented by her parents, she stumbles through life … and onto an unexpected clue that casts doubt on whether the death was accidental.

Now a psychological wreck, Ari joins a suicide support group where she meets Tina, a sex-enslaved escapee who finds her long-lost father dead. Suicide, police ruled it. But Tina suspects foul play. As a bond develops between the women in their shared loss, they’re dragged into playing a dangerous game with a killer.

Faced with a murderous wake-up call and two possibly linked deaths, Ari’s investigation puts her next on the killer’s list. But she’s never been one to back down from a fight.

Needing closure, Ari must face her demons and the killer behind them … or lose everything she loves.”

Pamela Crane is a professional juggler. Not the type of juggler who can toss flaming torches in the air, but a juggler of four kids, a writing addiction, a horse rescuer, and a book editor by trade. She lives on the edge (ask her Arabian horse about that—he’ll tell you all about their wild adventures while trying to train him!) and she writes on the edge. Her characters and plots are her escape from the real world of dirty diapers and cleaning horse stalls, and she thrives off of an entertaining tale.

She is the author of several award-winning and best-selling psychological thrillers.

facebook.com/pamela.crane.52
As always don’t forget to check out my books here.

There are never enough episodes of #meateater on #netflix . Love that show
The Evil Empire. You suck #disney . Cancel #cancelculture #censorship #censorshipsucks
Cohen’s first race. Touch and go for a minute. Thank God for noise canceling headphones.
FREE TODAY AND TOMORROW ON AMAZON. Link in bio.
FREE February 11-13!
#cancelculture warriors, you guys are doing great. Maybe let the market decide people’s fate cause you dic$&eads clearly do not have your finger on the pulse of America. Playing thought police doesn’t seem to be panning out.