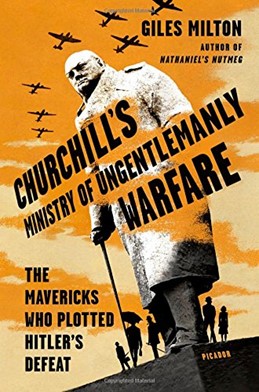 Quite possibly one of the longest titles in history: “Churchill’s Ministry of Ungentlemanly Warfare: The Mavericks who Plotted Hitler’s Defeat,” was also one of the most fun books I’ve read in the last five or six years. Giles Milton managed to find and capture an aspect of World War II that I had never heard of, and I am a history buff.

In 1940 the Nazi’s were taking over Europe. Winston Churchill had just taken over in Britain and was pretty much the last man standing up to Germany. He recognized Britain was on Germany’s hit list and wanted a plan in place to resist once the Nazi’s invaded Britain.

Hence the Ministry of Ungentlemanly Warfare.

“Churchill’s Ministry of Ungentlemanly Warfare,” details how a secret ministry of sabotage started from scratch and became and industry unto itself. Milton does a great job of capturing the cultural, genuinely British, conflicts that were a constant between the regular military and Section D of the Secret Intelligence Service. The idea of saboteurs and assassins did not sit well with the right kind of English gentlemen. On the flip side Section D argued that dropping a hundred bombs on a target might accomplish the mission. But a group of highly trained and motivated saboteurs could guarantee a surgical strike at a fraction of the cost or the collateral damage bombs dropped from 30,000 feet apt to cause.

The book follows Colin Gubbins, who stood up and made Section D into a powerhouse. Gubbins created a factory for explosives, specifically designed for devious small unit raids. He organized a kill school run by two old British ex-pats tossed aside by the establishment when they came home to fight for Britain. And he inspired a world-wide intelligence network that facilitated acts of sabotage from a vital hydro-facility in Norway to an ancient aqueduct in Greece used to supply Rommel’s tanks in Africa. Not only does Milton take you through each of these adventures but he does it by capturing the wild spectrum of men and women who fought the secret war. Professional adventures, engineers, secretaries, and even a conscientious objector turned operative made Section D what it was. Of note among Section D and its saboteurs, Milton does a particular service to the contributions and the sacrifices women made to ungentlemanly war.

If you are a history buff and want to read about an important but forgotten part of World War II give Giles Milton’s “Churchill’s Ministry of Ungentlemanly Warfare” a serious look.

Here is the back-cover blurb:

“Six gentlemen, one goal: the destruction of Hitler’s war machine

In the spring of 1939, a top-secret organization was founded in London: its purpose was to plot the destruction of Hitler’s war machine through spectacular acts of sabotage.

The guerrilla campaign that followed was every bit as extraordinary as the six men who directed it. One of them, Cecil Clarke, was a maverick engineer who had spent the 1930s inventing futuristic caravans. Now, his talents were put to more devious use: he built the dirty bomb used to assassinate Hitler’s favorite, Reinhard Heydrich. Another, William Fairbairn, was a portly pensioner with an unusual passion: he was the world’s leading expert in silent killing, hired to train the guerrillas being parachuted behind enemy lines. Led by dapper Scotsman Colin Gubbins, these men―along with three others―formed a secret inner circle that, aided by a group of formidable ladies, single-handedly changed the course Second World War: a cohort hand-picked by Winston Churchill, whom he called his Ministry of Ungentlemanly Warfare.

Giles Milton’s Churchill’s Ministry of Ungentlemanly Warfare is a gripping and vivid narrative of adventure and derring-do that is also, perhaps, the last great untold story of the Second World War.” 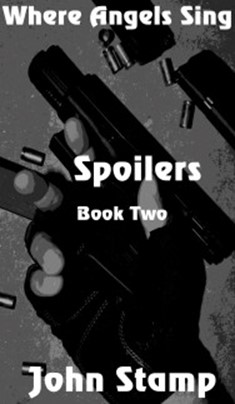